Do you know IIT full form?

Full form of I.I.T in English: Indian Institute of Technology

The autonomous public institutes providing higher education in India are the big names ‘IIT’.By IIT we mean the Indian Institute of Engineering. The IIT’s are governed by the Act passed in the year 1961: Institutes of Technology Act, 1961. 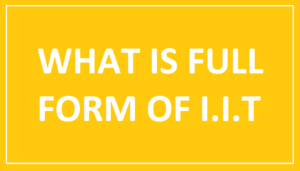 The Act deems these Institutions with National Importance status. After the last amendment in the Act, it now lists 23 institutes in total. The HRD-Minister of India is the ex-officio Chairperson of the main IIT Council and oversees the working.

1994 saw the setting up of IIT at Guwahati. IIT Roorkee was made by transforming the University of Roorkee. 2008-2009 aw a rise of eight IITs namely: Gandhinagar, Mandi, Jodhpur, Ropar, Hyderabad, Bhubaneshwar, Indore, and Patna.

The BHU was converted to an IIT in the time period of 2008-2009. Six more IIT were announced in 2016, Jammu, Goa, Bhilai, Dharwad, Palakkad, and Tirupati. ISM Dhanbad has been given the status quo of being an IIT.

The IITs offer a varied range of courses to the interested students. JEE Advanced is conducted for admission in undergraduate programs of IIT. For postgraduate admissions GATE for M.Tech and M.S. degrees, CAT for MBA admission, JAM for M.Sc. and CEED for Design degrees.

Following the footsteps backward we get to know that the IIT system dates back to the year 1946, Sir Jogendra Singh a member of Viceroy’s Executive Council set-up a committee to redraw the Higher Technical Institutions for post-war development in India.

The committee comprised of 22 members headed by Nalini Ranjan Sarkar. The Committee advised the setting up of these institutions in the country.

The first IIT was founded at a site of the detention camp in Kharagpur in the year 1950. Pt. Jawaharlal Nehru the first Prime Minister of the nation attended the first ever convocation at IIT Kharagpur in 1956.

The Sarkar Committee kept on improvising the system for better institutions. They suggested setting up of four more campuses in the country. The chosen cities being: Bombay (1958), Kanpur (1959), Madras (1959) and Delhi (1961). The cities were so chosen as to cover every corner of the nation. More campuses have mushroomed in the later years.

More and more efforts have been made to make the IITs look the way they look today. In the year 2003, Atal Bihari Vajpayee the then PM of India took active steps to improve the IITs as well as set up more of them. SK Joshi Committee was formed in the same context.

5 institutions were led by the committee to become IITs. As each state wanted to host an IIT, 16 states offered to have an IIT. The stringent guidelines laid down by the SK Joshi Committee allowed only 7 to get a chance to host an IIT. There have been plans to set-up IITs outside the country but not much has been done about that.

The President of India is the ex-officio Visitor and the residual powers ret with him, making him the most powerful person in the organization. The IIT Council is headed by the President.

The Board of Governors holds the Director under its direct control. The Director holds the post of the chief academic and executive officer. The Deputy Director lies beneath the Director in this hierarchical system followed by the Deans.