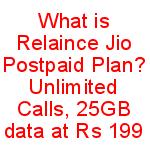 This new postpaid plan has come up with unlimited voice calls and free SMS, as well as 25 GB of mobile data and in this plan those users who have consumed the 25 GB of data will pay 20 rupees per GB of data, these all are the information which has come up from the official site of Reliance jio. This new Reliance jio plan is highly expected to trigger a lot of competition in the telecom sector say the analysts. Reliance jio has also announced its international roaming and international calling tariff for the postpaid and prepaid subscribers alike.

Reliance jio said that the 2 Rupees service for the voice data and SMS is provided in 33 countries which includes Canada New Zealand the United Kingdom you the United States and the Netherlands.

Where is if roaming is considered in countries like Australia China Russia Germany Kuwait Myanmar South Korea Spain the subscribers will need to pay 10 rupees per minute for call 10 rupees per SMS and 10 rupees per MB of data saved by Reliance jio officials.

The link for Reliance Jio Postpaid Plan  is: http://www.jio.com/postpaid

Here, is an amazing offer that Reliance jio is providing, as this postpaid offer provides 25 GB of 40 data to the subscribers with no daily limit it totally comes up to the subscriber that subscriber bonds it to use as a onetime total consumption or on the billing cycle. Simultaneously the customers or the subscribers are getting unlimited calling on national local. The Reliance jio rupees 199 postpaid plans also come up with pre-activated ISD calling without any deposits regarding security.

Moreover, these postpaid subscribers how to make ISD call to the United States or country like Canada at 50 paise per minute. However, Reliance jio plan does not offer it roll over facility 2D unlike Vodafone, Airtel etc. The subscribers of Reliance jio will also get complimentary free access to the apps that are present in jio application like jio cinema jio music jio TV and jio security as well.

This Reliance jio new postpaid plan has taken everyone by surprise for sure postpaid plan priced at rupees 199 offer Siemens new things to get subscribers compared to the other service providers.199 monthly rental plans customers do not require to pay any security deposit for getting international calling services. Also offers 25 GB of internet data and unlimited messages.

These plans once again will challenge the industry the Telecom industry by offering lowest tariffs in India and abroad to postpaid subscribers who generally ended up paying appropriate higher prices compared to the prepaid segment. This highly attractive and customer friendly tips will surely help the subscribers to remain connected everywhere all around the world without thinking of the will cost that they have been used to think about this for years in the past.

It has been said that the new postpaid plan of rupees 199 announced by Reliance jio is highly expected to hit revenue of competitors and for sure trigger tariff war for in the postpaid segment according to the market analysts.

Reliance jio tariffs as offered by Reliance jio are quite competitive sure give a very tough competition to the competition in the telecom sector. For this new postpaid plan, 199 will not require to pay any security deposit and the subscribers will get unlimited free voice call SMS and 25 GB of data at 4G speed. CLSA analysts like Deepti Chaturvedi and Akshat Agarwal said that 5 percentages of the telecom sector subscribers I have subscribed to postpaid plans.

It has been shared hi Morgan Stanley that the new plans of Reliance jio postpaid customer name pack 1 percentage of the new generated by Airtel mobile in case medias available tries to match the tariffs.

On 15th of May 2018 Reliance jio announced at rupees 199 postpaid plan which offers 25 gigabytes update every month it directly signifies that it is 50% cheaper call plans provided by the rivers and is at 60 percent discount for sure to their average revenue per user, according to Jeffries.

The link for Rupees 199 postpaid plan is: https://www.jio.com/postpaid-4g-plans