LOL refers to laugh out loud slang. It’s used in different situations to express sudden amusement. People often confuse in the manner in which this slang is used. It is used in face to face conversations and in social media.

The humour of this slang is very popular among the youth. Its used in casual conversations. Electronic media is responsible for the widespread of this internet slang. Its spoken and written in different forms.

Some people use CAPS while writing LOL while some don’t. it all depends on the way we are using it. It is forbidden to use LOL in formal conversations.

It can be used as an interjection or a verb. LOL creates a contradictory situation. It is used in an ironical form lot of times.  People often manipulate the way in which this acronym is used. It can have millions of full forms.

Also read  What is the Full form of SEO, SMO, PPC and SEM ?

The slang ‘LOL’ spread across internet on use net in early 90’s. Later on with technological advancement usage of this slang became popular in conversations. ‘LOL’ created its space in virtual word gradually spreading its arms to day to day conversations.

How is LOL slang used in different manners? 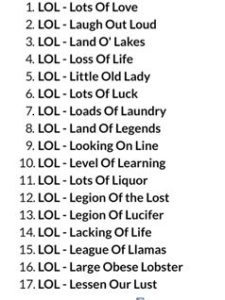