What does IPCC stand for?

The Intergovernmental Panel on Climate Change ( IPCC ) was set up on the request of the member Governments by the United Nations. The Panel is dedicated to the task of providing the objective and scientific view of the climate change and also bringing forth the economic and political impacts.

The panel was established by two United Nations organizations, World Meteorological Organization (WMO) and United Nations Environment Programme (UNEP) in 1988. The membership to the panel is open to all members of UNEP and WMO. The IPCC prepares reports in accordance with and support to the United Nations Framework Convention on Climate Change (UNFCCC).

The reports cover all the scientific, technical and socio-economic information in coherence with the scientific basis of risk of human-induced climate change, its potential impacts and options for adaptation and mitigation.

Also read  What is the Full Form of NASSCOM?

The IPCC does not carry out its own research. It seeks information from the published literature, this can be peer-reviewed or non-peer reviewed literature. Many scientists and other experts work voluntarily for IPCC to form and compile these reports, which are then reviewed by the governments. This actually means working with delegates of more than 120 countries. In 2007 IPCC shared Nobel Peace Prize with AI Gore. 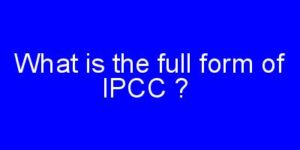 The Advisory Group on Greenhouse Gases, set up in 1985, was the predecessor of the IPCC. US government strongly backed the formation of IPCC as an autonomous body, in which scientists were the main force reckoning with the pollution issues and representing their countries. The panel procures and assesses the impact of environmental pollution.

The chair has been with the Korean economist Hoesung Lee since October 8, 2015. And elected bureau assists the chair, comprising of vice-chairs, the working group of co-chairs and a secretariat. The panel is composed of representatives from different countries. Sometimes the Non-Governmental and Intergovernmental committees are allowed to observe the proceedings of the Panel.

The IPCC reviews the already published data. The information is studied and compiled by the experts. The panel gives preference to the peer-reviewed data. There are many groups which come together for the accomplishment of an environmental report.

IPCC has faced its own share of flak as well. As it does not carry out its own research, the panel is often questioned over the outdatedness of the data as the research they review is always older than the day today. The scientists are also being overworked as they have to follow up with their own research projects as well as the IPCC work.

IPCC is viewed as the pioneer in pollution control as it foresees the changes due to the inclusion of the scientific study of the harm and the human impact. We know we cannot undo what harm has been done but IPCC is using its whole might to bring the harm to a halt.