Do you know WTO full form?

World Trade Organization regulates the trade taking place all over the world. WTO is an Intergovernmental Organization. WTO began under the Marrakesh Agreement, signed by a total of 124 nations on 15 April 1994.WTO replaced the General Agreement on Tariffs and Trade (GATT).

Regulation of trade, services and intellectual property in the member countries by giving negotiation agreements and resolving disputes, which is entirely aimed at the welfare of the member countries. WTO is the largest trade organization at present. WTO readily tries to solve trade disputes between nations.

Roberto Azevêdo is the current Director General of the World Trade Organization.On January 23, 2017, the first-ever amendment was made to the rules of WTO since its inception. The first comprehensive agreement in WTO’s history was agreed upon by all its members on 7 December 2013. 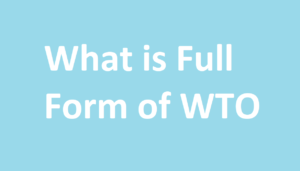 WTO has been shown to improve trade. It is believed that trade might not have been this smooth in the absence of WTO. Ministerial Conference is the highest decision-making body in the organization.

The conference meets in every two years. All the members of the Organization are brought together for this conference. The Ministerial Conference is capable of taking decisions on each matter was taken up by the WTO. Sometimes the Conference even takes part in arguments between countries and solves disputes.

Analysts regard these functions as the most important ones at WTO:
Supervising the execution, operation and administration of the agreements covered. The function of being a forum for negotiating deals and offers and for settling disputes.

It is WTO’s duty to look into the trade policies and practices of nations. Coherence and transparency must be ensured in the trade policies of the global village. WTO assists developing and under-developed nations to settle with the rules of WTO.

WTO facilitates the implementation, operation, and administration of the objectives of the Agreements and the policies of multilateral trade in the free market. It also provides with the basic framework of trade policies. It provides with a forum for discussion of trade issues and multilateral relations cordiality.

It administers rules and limits to the Governance and Settlement of Disputes.
It sets up the Trade policies and reviews its efficiency. WTO works towards achieving a better coherence in global economies. It cooperates with the International Monetary Fund and other International Banks.

The above-listed functions are additives to the basic working of WTO. Glottalization gives rise to the necessity of an International Organization to manage the trade ongoing in the World.

There arise many issues when the trade increases. Such issues are trade barriers, subsidy regulation, violation and trespassing of private property, protectionism etc.WTO peeks, addresses and solves the different issues faced by the countries regarding trade and exchange systems.

WTO headquarters also forms the center for economic research and analysis. It carries out assessments of the trade conditions on a regular basis the results are published annually. Research papers are issued annually by the Organization on various topics.

The main Five Principles followed by the WTO are:

Non-discrimination– Discrimination is never used as a force by the WTO on the member nations to follow the policies envisioned by WTO. Reciprocity-Gains are important for trade. That is what reciprocity ensures.

Binding and enforceable commitments– WTO ensures multilateral and unilateral trade with different nations. If compensation is not provided, the nation can revoke the redress forum of WTO.

Transparency– The WTO is requested o be transparent with the Organization and other member nations about trade policies and taxations.

Safety values– The countries are allowed to restrain from trade in specific conditions. WTO allows nations to regulate their trade practices with the result to their economic conditions.