Do you know PPP full form?

Macroeconomics deals and relies on different standards to analyses economic
productivity. The touchstone for comparing standards of living between two
countries can be different at different periods of time or could remain consistent. One popular and widely accepted metric is purchasing power
parity (PPP).

Purchasing power parity (PPP) is a neo-classical economic theory that compares the currencies of different countries currencies through a “basket of
goods” approach.

According to this concept, we compare the currencies of the nations in question. The currencies are at par if the basket of goods can be bought at the same price in both the countries, keeping in mind the exchange rate of currencies. 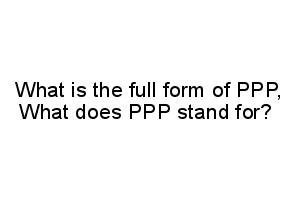 The theory of purchasing power parity has been formed to bring to picture the
adjustments and changes to bring the two currencies in question at par with each other.

Also read  What Is The Full Form of MBA?

We can state that they wish to narrow the divide in the prices of goods in two different nations, after taking into consideration the exchange rates of the currencies. Or we can say that the price should be in proportion to the purchasing power of the two currencies.

Purchasing power parity is a very easy aspect to compare income levels in different nations. PPP makes the economic data of each country easy to understand.How PPP Is Used to analyses an compare any two entities deals with a lot of statistics and data.

To deal with this data interpretation work, International Comparisons Program (ICP) was established in the year 1968. ICP was set up together by the University of Pennsylvania and the United Nations. Purchasing Power Parity was brought into the picture by the ICP.

PPP is based on the worldwide price survey, comparing the prices of hundreds of various goods. This data has proved useful to macroeconomists to draw up growth and productivity rates on a global level.

Every three years a report is prepared and released by the World Bank comparing various countries in terms of PPP with respect to U.S. dollars. The
International Monetary Fund (IMF) and the Organization for Economic Cooperation and Development (OECD) use PPP metrics to make predictions used to recommend economic policy.

These actions often impact financial markets in the short run. Overvalued or undervalued currencies can be predicted by skilfully employing PPP. Investors survey PPP figures to analyses and predict the impact of exchange-rate fluctuations on the country’s economy.

Example: if we consider that a baby walker costs Rs 2500 in India. Then according to PPP it should have a marked price $50 in America provided the exchange rate is 50 between the dollar and the rupee. This way we can say that there exists a healthy purchasing power parity.

Also read  What Is The Full Form of IUPAC?

Which Nations Have the Highest Purchasing Power?
If we are comparing the rates of purchase then there must be some top notches as well to look up to. The top five nations who have the highest GDP in market exchange terms are the U.S.A, China, India, Japan, and Germany. China took over the USA in 2017 in terms of PPP. India, Japan, and Germany follow the suite.